If you were keeping up with the Winter Olympics in PyeongChang, you may have heard about the podium drama during the Women’s Ice Hockey medal presentation.

After being beaten 3-2 in shootouts by their rivals the United States, the Canadian team took the podium to receive their silver medals.

That’s when the drama happened.

Moments after the medal had been placed around the neck of Canadian player Jocelyne Larocque, she immediately removed it, and stood for the rest of the ceremony with the medal scrunched up in her hand.

It set the social media world alight as people raced to criticise or support Jocelyne.

Looking at her face you can viscerally feel her pain.

I’ve been in that very position myself (albeit not on an Olympic podium) but certainly in second place. After over 20 years playing hockey (field not ice) I’ve lost my fair share of finals.

And I’d suggest anyone who’s ever played sports either at club, national or international level can relate to how crushing it feels when you don’t win a final.

The truth is when you don’t win, it hurts.

It’s f*cken painful to spend so much time and energy trying to get somewhere and then to fall short at the final hurdle.

Or to be outclassed by a better team. Or to lose a match you know you should have won. Or be beaten by your rival.

None of that is an enjoyable experience.

It can cut you to the core. It can make you question whether you’re good enough. It can cause teams to pull apart.

So while we can understand and relate to how Jocelyne felt, standing there receiving the silver medal rather than gold, there is still part of me that shakes my head at her behaviour.

Part of me wishes she’d been a better person about the whole thing.

In sport there is always a winner and a loser.

The very definition of competition is “the activity or condition of striving to gain or win something by defeating or establishing superiority over others.”

So every sports person out there always enters into their race or match with the understanding someone will win and someone will lose.

Only one person or team can come out on top.

(Yes sure you can draw but that’s just delaying the inevitable to another day. How many times have you drawn a match or equalled someone and felt disappointed? How many times has a draw resulted in a rematch where one side exerts their dominance?).

Now while losing isn’t something you ever think about, at the end of the day, it has to happen to someone.

So for Jocelyne to stand there, even with all the disappointment in the world on her mind, to behave like a sore loser doesn’t sit well with me.

“Be humble in victory and gracious in defeat”

In my view, being humble in victory and gracious in defeat is a guiding truth in sports. Almost a secret rule that no-one talks about but it is expected of every athlete and team.

Nobody likes the cocky winner who rubs their win in your face.

Just like nobody likes the sore loser who throws a tantrum and walks off the field of play without shaking your hand.

Your ability to control your response to an event, especially one where the outcome wasn’t as you planned, shows great character and mental strength.

It separates the truly great from the average and mediocre.

Even at the Olympic level.

When you lose you don’t have to be happy about.

You can be sad, cry, be quiet or even a little angry (I know I’ve done all of the above).

You just don’t need to be a dick about it.

Because right in that moment you’re not only representing yourself, but you’re also representing the people that got you there.

The coaches who worked with you.

The other members of your team who played by your side.

Your family and friends who sacrificed for your success and supported you in your endeavours.

And the team, club or country you play for.

When you’re not a gracious loser all of those people in an instant are disrespected.

And you disrespect yourself.

Unfortunately, Jocelyne will go down in history as that person.

While being gracious in defeat is perhaps one of the hardest things you have to do as an athlete I believe it shows the true measure of an individual.

And on this occasion Jocelyne fell short.

What do you think of Jocelyne Larocque’s response to winning silver?

Should she have been more gracious in defeat? Or was her response justified? 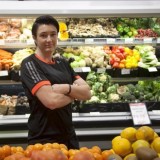